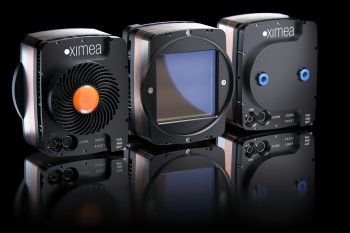 The MX377 was designed for specific user requirements and a wide range of scientific applications in mind e.g. high energy physics, life science, TEM, astronomy, SSA. Especially the photonics industry benefits from the combined elements of high-speed CMOS performance with CCD characteristics. The MX377 delivers 37.7 Mpix with a pixel size of 10 μm. A high dynamic range and low noise is provided, with air or water-based cooling options. Supported by Windows, Linux and MacOS, the MX377 follows the standards of PCI Express and GENCAM. The sensors format is 61x61mm with a 6k-by-6k resolution and dual amplifiers. The MX377 reaches a maximum Quantum Efficiency of 95% with a dynamic range up to 90 dB with a full well capacity of 110 Ke-.

Innovation: The MX377 camera was developed with a large format sCMOS, whose characteristics allow camera´s applications to be versatile in many different scientific fields. Specifically, for high energy physics, life science, TEM, astronomy, space situational awareness (SSA) among others. Designed with a multi-lane PCIe interface, the MX377 camera is able to deliver data at the maximum rates the sensor is capable. CCDs have historically been to go-to sensor for scientific measurements, but this new generation of sCMOS sensors offers the performance necessary for precision applications (high dynamic range, high sensitivity, low noise) even with the added benefits of CMOS performance (high speed, flexible readout). The MX377 match the CCDs technology with the pace of CMOS innovation, unlike former in-class cameras.

It is equipped with the Gpixel GSENSE6060 sensor and therefor represents the camera with one of the largest sCMOS sensors available today. As the medium and large format sensors are supplied in a very compact housing, they are compatible with M95 lenses. Recently the next generation of high-speed serial computer expansion bus standards the PCI Express Gen3, called PCIe 3.0 with 4 lane interface, made a huge jump in many aspects. With the multi-lane PCIe interface, the MX377 is not only able to deliver data at the maximum rates the sensor is capable of, moreover provides data with near zero latency from the sensor to the operating computer’s RAM (or GPU) for optimum processing capability and speed. The implementation of the PCle 3.0 features a number of interface architecture improvements and achieves twice as much the communication achieved by its antecedents, which makes it the best interface currently available.

With 37.7 Mpix and pixel size of 10µm, the camera offers imaging performance on par with the best CCDs. The sensors format is 61 x 61 mm with a 6k by 6k resolution and has a number of groundbreaking properties with high dynamic range (FWC close what is expected from CCDs) and dual amplifiers for simultaneous integration of the imagery to deliver high bit depth information on the contents of the image. All this with a frame rate of up to 46 fps in full resolution (STD mode).

Compared to other in-class cameras, it is one of the most compact cameras at only 110 x 98 x 63 mm, and lightest at only 300 grams total weight. Robustness and optimization are the results of continuous improvement of the CNC machined cameras housings, which provide new components and even better thermal conductivity. Compared to the sensor size of 61 x 61 mm, the housing made from top quality components remains highly compact true to XIMEA´s principle of speed and compactness. The very small form factor with such a large sensor is a big advantage for applications like astronomy where the camera is located at “prime focus” of a telescope. The light weight and small size allow for a much less obstruction of incoming light and a concomitant increase in sensitivity for the whole telescope.

Several versions of the GSENSE6060 sensor, including frontside (FSI) or backside (BSI) illuminated models, are included in the MX series. Due to the special cooling system, the Thermoelectric Peltier System, which can be equipped with water or air cooling to reduce thermal noise for long exposures, the MX377 is particularly suitable for low light applications. Temperatures as low as -25°C can be achieved with the water-cooling option.

Processed by two readout amplifiers (hi and lo), the output signal from the GSENSE6060 sensor allows an HDR readout of 2 x 12bit ADC and a low readout noise of 3e-. 90 dB of dynamic range is reached by the camera with a full well capacity of 110 Ke-. The readout from the two amplifiers is customizable, which offers advantages for numerous applications. Low light applications may need the high gain readout for the ultimate in low noise, while others will benefit from the low gain mode for full dynamic range access.

With the characteristics listed above XIMEA’s MX377 camera presents itself as one of the most compact and fastest large sensor sCMOS cameras currently available in the market.

Please vote for us: inspect award 2021