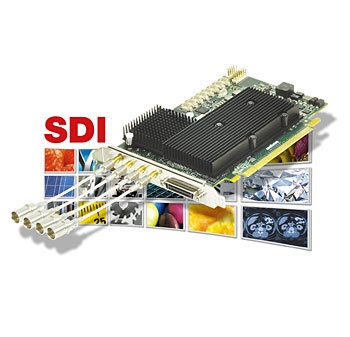 The term high definition HD video has traditionally been associated with the consumer electronics and broadcast industries (e.g., HDTV). With its higher resolutions, standard high definition video is increasingly used by industrial markets where image quality is as important as it is for TV broadcasting, if not more. In fact, HD video is now favored over its standard definition counterpart in applications like endoscopy and flight training simulators. Furthermore, the ability to display HD video with minimal latency is as critical to these applications as the capture of HD video itself.

For the imaging market, this represents a shift from basic standard definition (SD) analog acquisition cards to high performance cards capable of capturing and displaying multiple HD video sources. Matrox Imaging’s newest board, Matrox Orion HD, is a graphics adapter that addresses the needs of this market by supporting standard and high definition video inputs and outputs up to 1080p/60.

Matrox Orion HD captures from two independent digital or analog HD video sources and can output these video streams, which can be different formats, on the desktop. With support for different interfaces and flexible connectivity, the board can also switch between SDI, DVI-D, RGB, CVBS (up to 3) and YPrPb signals on each independent path. This allows for capturing and displaying different formats: SD (NTSC and PAL), HD (720p, 1080i and 1080p), or typical PC resolutions up to 1920x1200.

With its Matrox-designed graphics-controller, Orion HD acts as a primary or secondary display device. Captured video and images are displayed on the desktop or to a separate monitor exclusive to the application. Also supported is the option of adding standard graphics annotations.