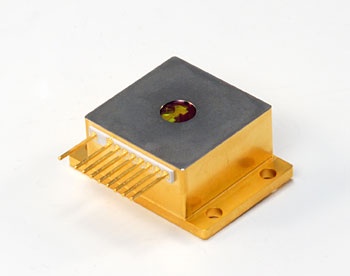 Hamamatsu Photonics introduce a new range of Quantum Cascade DFB Lasers. The new L10195 series is available as standard with two wavelength options, 7.7 microns for the L10195-01 and 5.2 microns for the L10195-02, each with a typical output power of 15 mW. New Quantum Cascade Laser (QCL) technology is the only midinfrared semiconductor laser that can easily operate at room temperature utilising peltier cooling.

Since the L10195 has a very narrow spectral linewidth, and wide tunabitily by changing the chip temperature, it is an excellent candidate for the next generation Infrared laser spectroscopy systems. This technique has widespread applications for environmental monitoring, medical diagnostics (such as human breath analysis) and security applications (such as explosives detection).
The QCL is based on a fundamentally different principle from conventional semiconductor laser diodes. Since the QCL does not have any PN junction, it is not a true laser diode, instead the QCL mechanism utilises inter sub-band transitions, which are carefully designed by means of quantum theory.

The tunability of the QCL emission wavelength enables measurement of a wide variety of gases such as CH4, N2O and H2CO at their absorption lines within this tuning range.
The QCL is a revolutionary tool enabling high sensitivity, high resolution gas analysis that can not be achieved using conventional spectroscopic techniques.

Interferometry in the palm of your hand